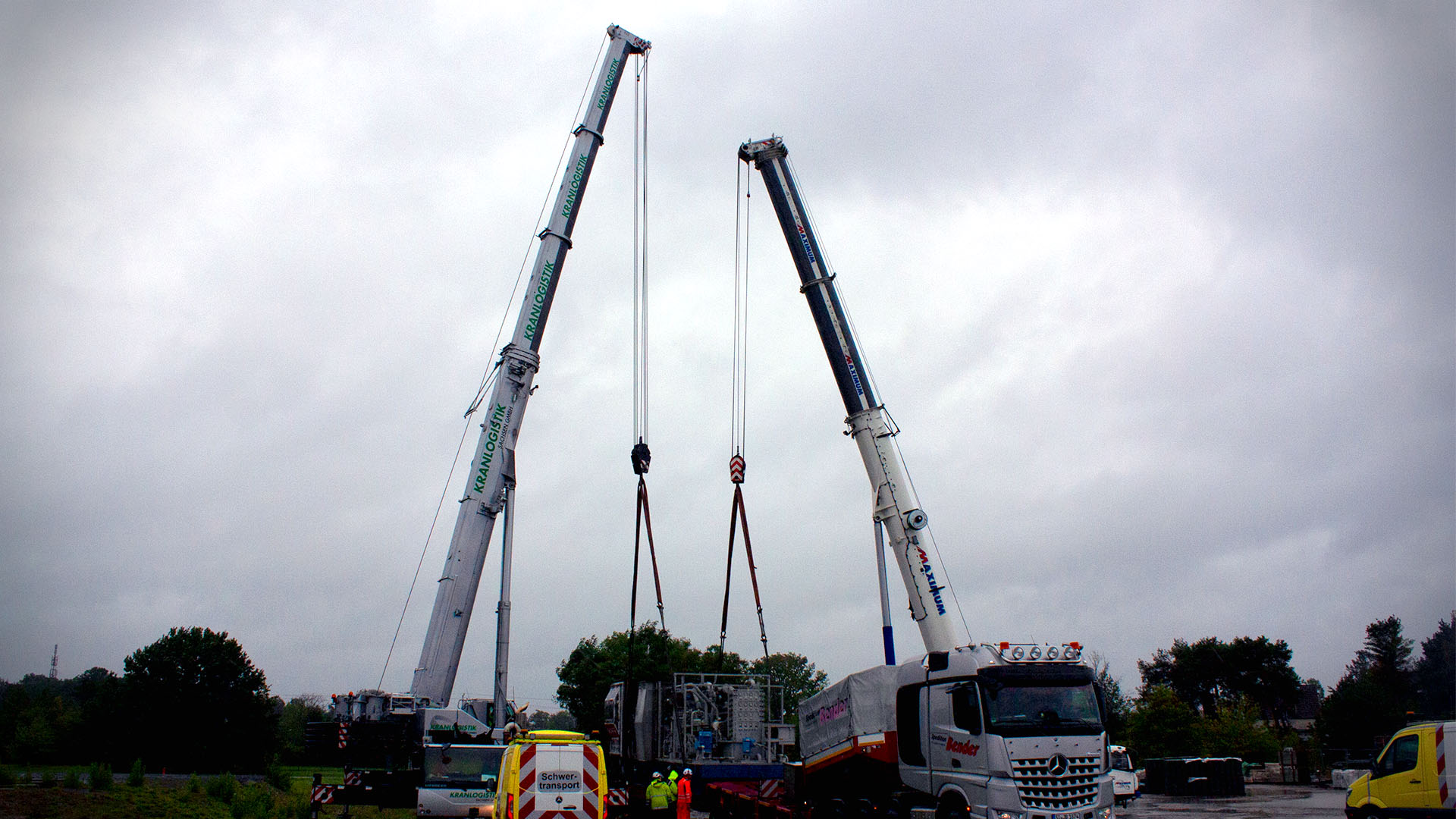 Trapped between hot pipe bridges, the MAXIKraft crane driver wipes a few beads of sweat from his forehead. Slowly, very carefully he steers the arm of the crane. The MAXIKraft Group's efforts led our crane driver to BASF in Schwarzheide today. The BASF Group is the world's largest chemical company in terms of turnover. Among other things, technical plastics, foams and crop protection agents are produced in Schwarzheide.

The MAXIKraft Group was called in to lift and load a turbine and a generator, each weighing 100 tons, out of the power plant and transport them to other companies. At first glance, this sounds like a simple operation, but it turned out to be anything but simple. A lot of skill, concentration and talent was once again required from our crane operators!

Off to the BASF plant: The power plant continues to run at full speed while the MAXIKraft crane operator loads the turbine and generator in his crane, crammed between pipe bridges.Rainy weather makes the operation uncomfortable. But not only the MAXIKraft Group team has to struggle with limited space and rainy weather. The crane is also almost reaching its performance limits.

Due to the limited space available, only a smaller crane could be considered. The MAXIKraft Group decided on the LTM 1500 with 135 tons of ballast. The two objects to be transported were handled very carefully. Their final destinations were two different companies and they had to be transported there.

However, this was not easy to do with a crane because they are so heavy. In road traffic, the axle load of 10 tons must not be exceeded. This would have been exceeded with the crane. Therefore, the turbine and the generator were to be loaded onto trucks with boiler bridges. By means of the vessel bridges and the loading of the axles, the weight of 100 tons per object to be lifted could be distributed. No sooner said than done! The lack of space, however, led to a challenging situation as the boiler bridge could not find a place in the plant. Greatest concentration and skill were required.

A shorter truck was driven into the plant. This then brought the parts to be loaded onto an open area where two 160-ton cranes were already waiting. These helped to place the turbine and the generator in the boiler bridge and to set them down.

We did it! A delicate operation is coming to an end, but the MAXIKraft crane operator is already tickling his fingers again: On to the next project!